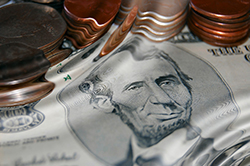 While I don't know Michael Snyder personally, from reading some of his works, I'm finding that we can be deemed kindred spirits when it comes to our views on debt. Michael's recent post on http://endoftheamericandream.com/ entitled America's Addiction to Debt - 30 Facts About Debt in America That Will Blow Your Mind provides some unfavorable yet verifiable facts on consumer debt in America that are eye opening. If you curently are in debt or living debt free, I'd encourage you to be informed by this reading and be aware of what's happening to us, by us as a result of our own pen strokes.

Many scriptures came to mind as I was reading Michael's article. Another day for that - look for insight on this in my next Simple Truth as a part of this series on debt. For now, I'm going to share the first paragraph of Michael's work...

Michael Snyder: When most people think about America’s debt problem, they think of the debt of the federal government. But that is only part of the story. The sad truth is that debt slavery has become a way of life for tens of millions of American families. Over the past several decades, most Americans have willingly allowed themselves to become enslaved to debt. These days, most of us are busy either going into even more debt or paying off the debt that we have accumulated in the past. When your finances are dominated by debt, it makes it really hard to ever get ahead. Incredibly, 43 percent of all American families spend more than they earn each year. Even while median household income continues to decline (now less than $50,000 a year), median household debt continues to go up. According to the Federal Reserve, median household debt in America has risen to $75,600. Many Americans spend decades caught in the trap of debt slavery. Large numbers of them never even escape at all and die in debt. It can be a lot of fun to spend lots of money and go into lots of debt, but it can be absolutely soul crushing to toil and labor for years paying off those debts while making others wealthy in the process. Hopefully this article will inspire many people to try to escape the chains of debt slavery once and for all.

To read my previous article in this series Click Here